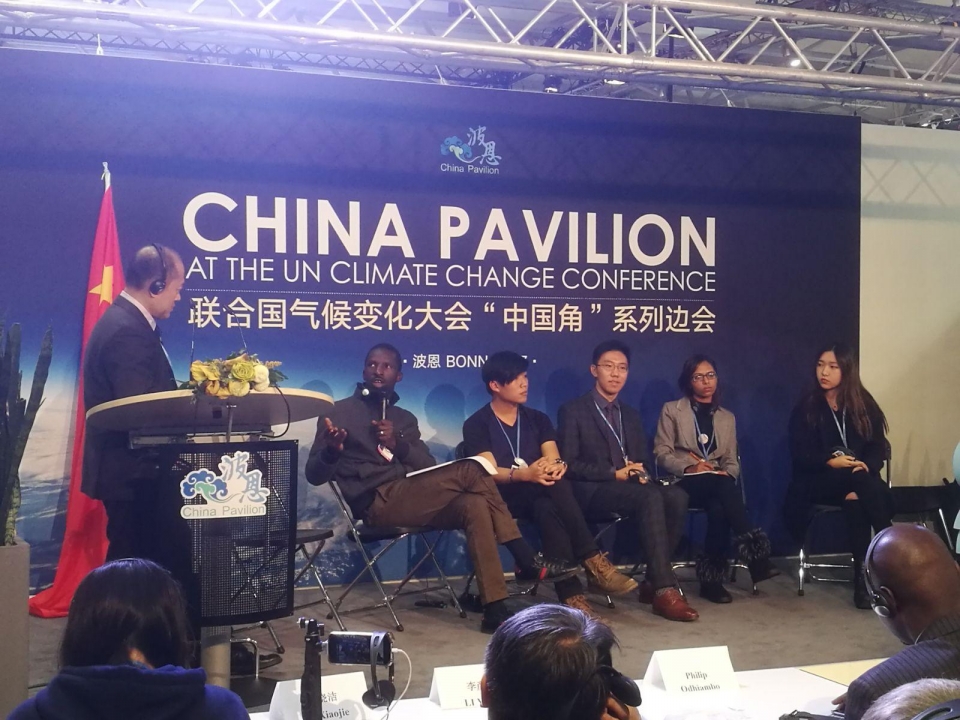 A frustrated Fiji after a denied legacy

Being the second conference since an agreement was reached in Paris on how to save the ship from sinking, and following a number of dress-rehearsals, the world converged in Bonn (COP23) with mixed expectations.

The very nature of the conference was in itself a source of hope for the participants. It was the first conference to be hosted by a small island state in a European country, at a time one of the top two emitters is making real it’s threat to withdraw from the agreement.

Small Island States are vulnerable to the rising sea levels which threatens their very existence. This places them on the lower deck of this sinking ship, together with other third world countries struggling to adapt to the negative impacts of climate change. It’s important to point out that all the countries are exposed to the impacts of climate change with the only difference being the degree of vulnerability.

The irony that welcomed the participants is one that can take a lifetime to dissect: 50 kilometers away from the conference center is the largest coal pit in Europe providing coal to 5 coal power plants. This in a country that is now providing leadership to Europe since the departure of the UK and whose source of energy is less than 30% renewable. And then you walk into the exhibition booths and pavilions and the focus on Renewable/clean energy, whatever the difference is, dwarfs everything else.

Thanks to the Norwegian Forum for Development and Environment, I had an opportunity together with my colleague Zelda to try and dissect this irony both within the negotiation rooms and in the side events zone. I had an opportunity to join three panels as a panelist to give a youth perspective on the climate change discourse in the spirit of intra and inter-generational equity. 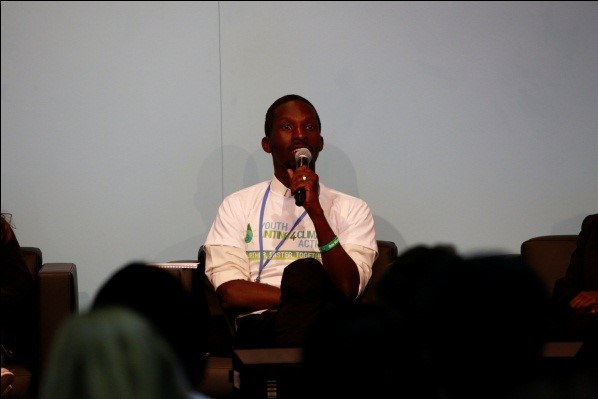 In all the three events, the message was one: The future of my generation and the future generations is at stake. And however much the stress is on the opportunity within the problem, the utmost concern remains with the solution of climate change as a problem.

You cannot build my resilience to withstand heat in a burning house without a significant effort to put off the fire. The house is already on fire and we must put the fire off if we care about the sustainability of the human race.

So, did the conference meet our expectations as the youth?

Within the negotiations rooms, the youth were celebrated after they were included in the ACE text. This milestone will ensure that the youth participate in the ACE workshop scheduled for next year and will be considered in the implementation of the decision on ACE.

In terms of the bigger problem - which is the implementation of the Paris Agreement to secure the future of the future generation - not much can be mentioned.

First the introduction of the Pre-2020 ambition and the call for ratification of the Doha amendment shifted the focus from the Paris rulebook and the post 2020 financial ambition. China while leading the introduction knew that this was a sweet carrot which would attract almost all parties within G77 and China negotiation block due to its ideal nature despite the impracticability of it. The discussions therefore shifted significantly from the rulebook, loss and damage, the new finance ambition, Global Stocktake, Finance reporting (Article 9.5), AF serving under the Paris Agreement, Guidelines to GEF, to other talk-show issues like the Pre-2020 ambition, and the membership of the SCF.

Silently negotiated without any formal meeting was the role of US in the negotiations within the Trump regime, and how their participation influenced the negotiations at COP 23. Being the number one finance contributor, every party was keen on ensuring US is allowed to graze freely without any conditions which might rattle the Federal government. The US delegation made it clear that the Federal Government will not domesticate any ‘foreign’ policy hence was keen to ensure no legally binding decision came out of COP 23. 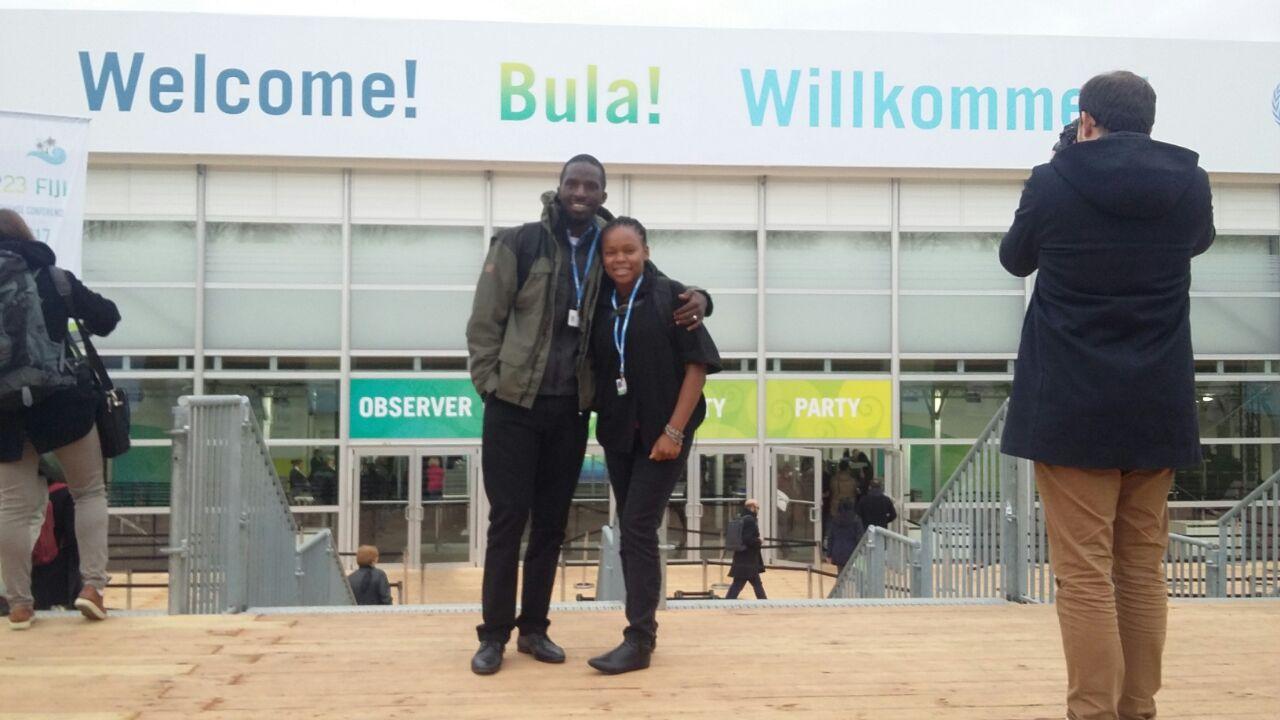 Fredrick and Zelda at COP23

Achievements
However, there were some achievements. The main one was the two-year gender action plan and the GEF guidelines which was one of the last texts to be adopted during the APA closing plenary.

The focus now shifts to the Facilitative Dialogue next year where substantive matters as regards the rulebook will be discussed. France is also hosting a climate finance conference from 10th December to mark the second anniversary of the Paris Agreement where the discussion on climate finance will the reopened, while Fiji goes home frustrated after a denied legacy at COP 23.

Apart from the Talanoa Dhow and a two-faced US delegation, there isn’t much for history to record. 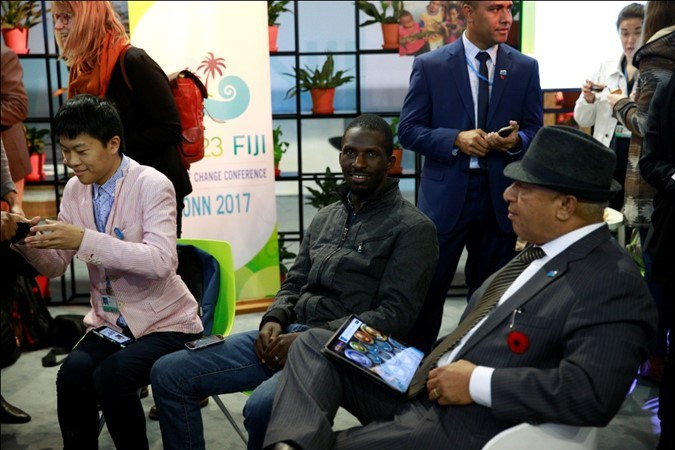